Lyme disease, or Lyme borreliosis, is a bacterial infection spread to humans by infected ticks.

Ticks are tiny spider-like creatures found in woodland and heath areas. They feed on the blood of birds and mammals, including humans.  Cases of Lyme disease have been reported throughout the UK, but areas known to have a particularly high population of ticks do include the North Yorkshire Moors.

Most tick bites happen in late spring, early summer and autumn this is because these are the times of year when most people take part in outdoor activities, such as hiking and camping.  Ticks can be found in any areas where there is deep or overgrown vegetation and where there is access to animals for them to feed on.  Ticks don’t fly or jump but they climb onto your skin or clothes if you brush against something that they’re on, they then bite into the skin and start to feed on your blood.  There are many ways of reducing the risk of getting bitten, the main ones are to keep to designated footpaths, keep any dogs on a lead and wear lighter coloured clothing as the ticks will then be more visible.

Ticks are not only harmful to humans but also to all ground nesting birds on the moors as treatment for birds is impossible.  Moorland estates try to reduce the risk of ticks by having a good flock of sheep on the moors as the sheep act as “tick mops”.  The sheep are dipped in a pesticide that attracts ticks and kills them off in huge numbers, and this has been welcomed as an effective and harmless method in the fight against ticks.

It is thought only a small proportion of ticks carry the bacteria that cause Lyme disease, so being bitten doesn’t mean you’ll definitely be infected. However, it’s important to be aware of the risk and seek medical advice if you start to feel unwell.  Generally, you’re more likely to become infected if the tick remains attached to your skin for more than 24 hours, however ticks are very small and their bites are not particularly painful, so you may not even realise you have one attached to your skin.

Lyme disease can usually be treated effectively if it’s detected early on, but if it’s not treated or treatment is delayed, there’s a risk it could develop severe and long-lasting symptoms.  If a tick bites an animal carrying the bacteria that cause Lyme disease, the tick can also become infected. The tick can then transfer the bacteria to a human by biting them.

The image below shows the before feeding and also the engorged tick after feeding. 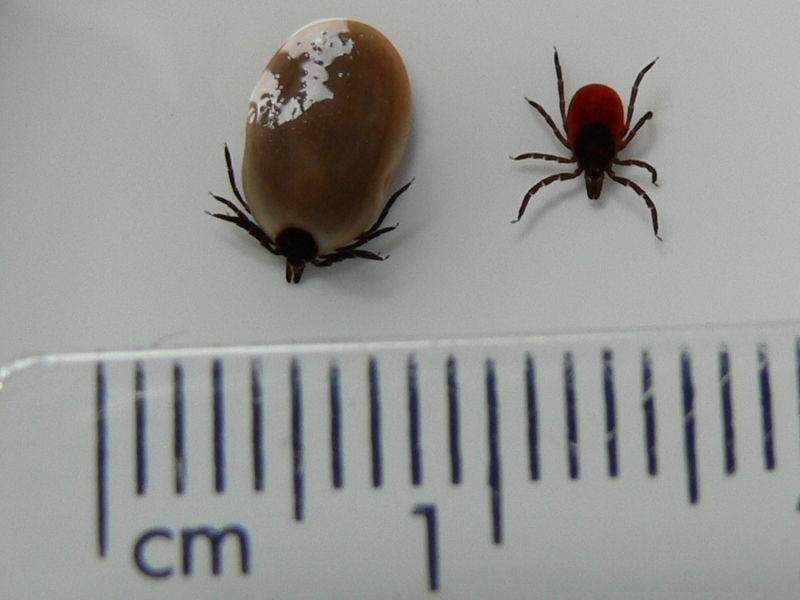 For more details on ticks and Lyme Disease please visit the Lyme Disease Action Organisation at the link below, they have a massively informative website with all areas covered.

An informative look at the past, present and future headline happenings of NYMMO.

We hope you like what you’ve seen so far on our Facebook, Twitter and Website pages and we are looking to continue moving forward.  Our aim is to promote the benefits of managed moorland and hopefully from the work we’ve done so far we are starting to achieve this!

A walk around the moor at this time of year reveals two striking contrasts to the previous few months.  Most noticeable to the casual observer is the vivid purple of Heather in full bloom that covers the landscape like a well fitted carpet replacing the dull brown of previous months.

The other perhaps less noticeable change is the relative silence in comparison to late spring!  By this I refer to the wading birds the Curlew, Lapwings, Golden Plover that have now left their breeding grounds of the North York Moors having enjoyed yet another successful year due in no small part to the habitat and protection that the managed Grouse Moors offer safe from predators.

This doesn’t mean there isn’t plenty to see at this time of year the young grouse are getting more confident and more visible, every spring and watercourse abundant with insects, not quite the barren wastelands being portrayed in the media in the run up to the Glorious 12th.  Only recently I came across a Bumble Bee nest nestled in the ground on one of our spring heather burns from a few months ago.
In late July we carried out our Grouse counts, this involves using trained gun dogs to flush the birds, following the same routes as previous years (often decades), to give us an accurate idea of the population size and the number of surplus birds we will be able to shoot.  For the most part the signs are good and reports from the rest of the North York Moors suggest another good shooting season.
With nesting activities over it allows the keepers to access the moor with vehicles in order to undertake essential maintenance to the many lines of butts used for shooting from, or the construction of new lines in areas where Grouse of previous seasons have favoured flying.
In order to access these butts, miles of Moorland tracks need to be maintained, requiring many hours of labour from the keepers and local contractors.  The time and expense of this work also benefits many other users of the moors with the ever increasing number of people taking to their mountain bikes becoming evident up and down these access routes.

The start of August is also the key period in which to control Bracken on the lower lying slopes of the moors. Bracken is an encroaching plant that forms a dense canopy and smothers the underlying vegetation. It is also a perfect breeding habitat for ticks that carry the dreaded Lymes disease which affects dogs and people, and Louping ill which affects grouse and has massive economic impacts on the sheep industry.  Spraying is the most effective method of control and ranges from the small knapsack spray right up to aerial helicopter mounted units for larger areas.

By the time you read this the first shots of the season will have been fired and the shooting season will be in full swing.  For those lucky enough to be shooting have a great season.

Information kindly supplied by the Head Keeper at the Wheeldale & Goathland Estate.